You are here: Home / UPGro: Unlocking the potential of groundwater for the poor “UPGro:

UPGro Unlocking the Potential of Groundwater for the Poor

Unlocking the Potential of Groundwater for the Poor (UPGro) is a major African research programme. 2015 was the third year of the seven year programme, and an exciting transition from the 15 short ‘catalyst’ studies to the start-up of five larger ‘Consortium’ projects that bring together nearly 100 academic researchers from Africa and Europe to tackle some of the most challenging questions around how can groundwater across Africa be used to alleviate poverty, without depleting the resource. While the five projects got themselves established, we continued to promote the scientific findings from the catalyst phase – which included a new, cheap way of detecting and measuring groundwater pollution, and a successful research into how to design roads in Ethiopia to increase groundwater recharge and reduce soil erosion.

At a larger scale, UPGro research showed that groundwater recharge in tropical areas only happens during intense rainfall events – and with more such events predicted with climate change, aquifers could have an increasing role in helping water users to get through dry periods.

We promoted UPGro at an international level by having a large stand at Stockholm World Water Week, in partnership with UNICEF; at the 2016 WEDC conference; and at the Congress of the International Association of Hydrogeologists.

UPGro-Unlocking the Potential of Groundwater for the Poor 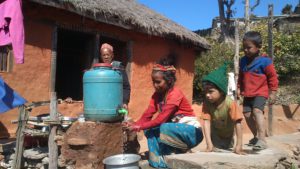 Training of Trainers and Development of Training Modules for high quality, sustainable...